The Metrix rating for a player is calculated as follows:

The Metrix rating and the PDGA rating are on the same scale. But they are not quite the same.

1. Collect at least 100 scores by a rated player (PDGA or Metrix rating). You can also retroactively insert an existing PDGA competition into Disc Golf Metrix. Make sure you enter it as a competition, not a training session, and make the competition public. Training sessions are not counted. Each player’s rating (before the competition) must be provided as part of registration details (see picture below). After the competition results are entered: select “Courses”, find the right course, and select “See rating analysis”. You should see a picture similar to Results3.png. You can remove and restore various lines on the graph by clicking on them. For example, leave only the results as in Results.png. The green line is an average of results by similarly rated players, and it shows a simple visual trend. 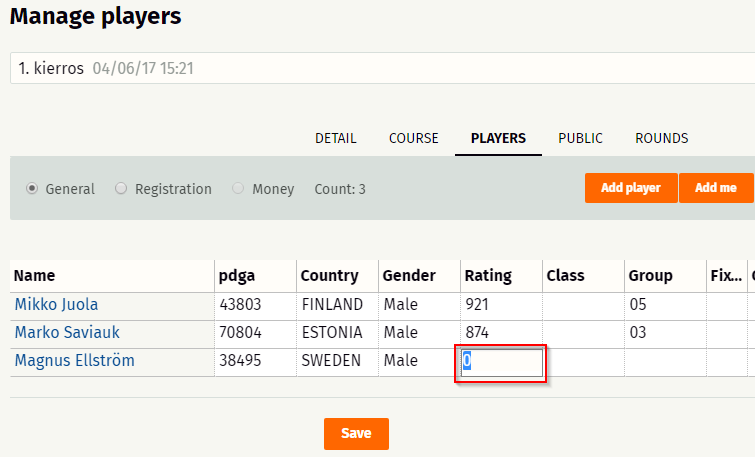 2. The red line on the graph shows the computer-suggested SSA (Scratch Scoring Averages). It consists of two datapoints:

3. When over 100 rated games have been played on the course, a button will appear below: “Save new SSA”. This can be pressed by all Metrix users. It saves the red line points to the database, and a rating line appears on the graph in dark blue (see Rating4.png). After that, all new and previously unrated games will receive their ratings. This happens during the next batch calculation run at 3am. However, your own ratings are visible in the graph immediately, without waiting for nightly batch run. Rating table will also appear below the course, showing the rating value for each throw result.